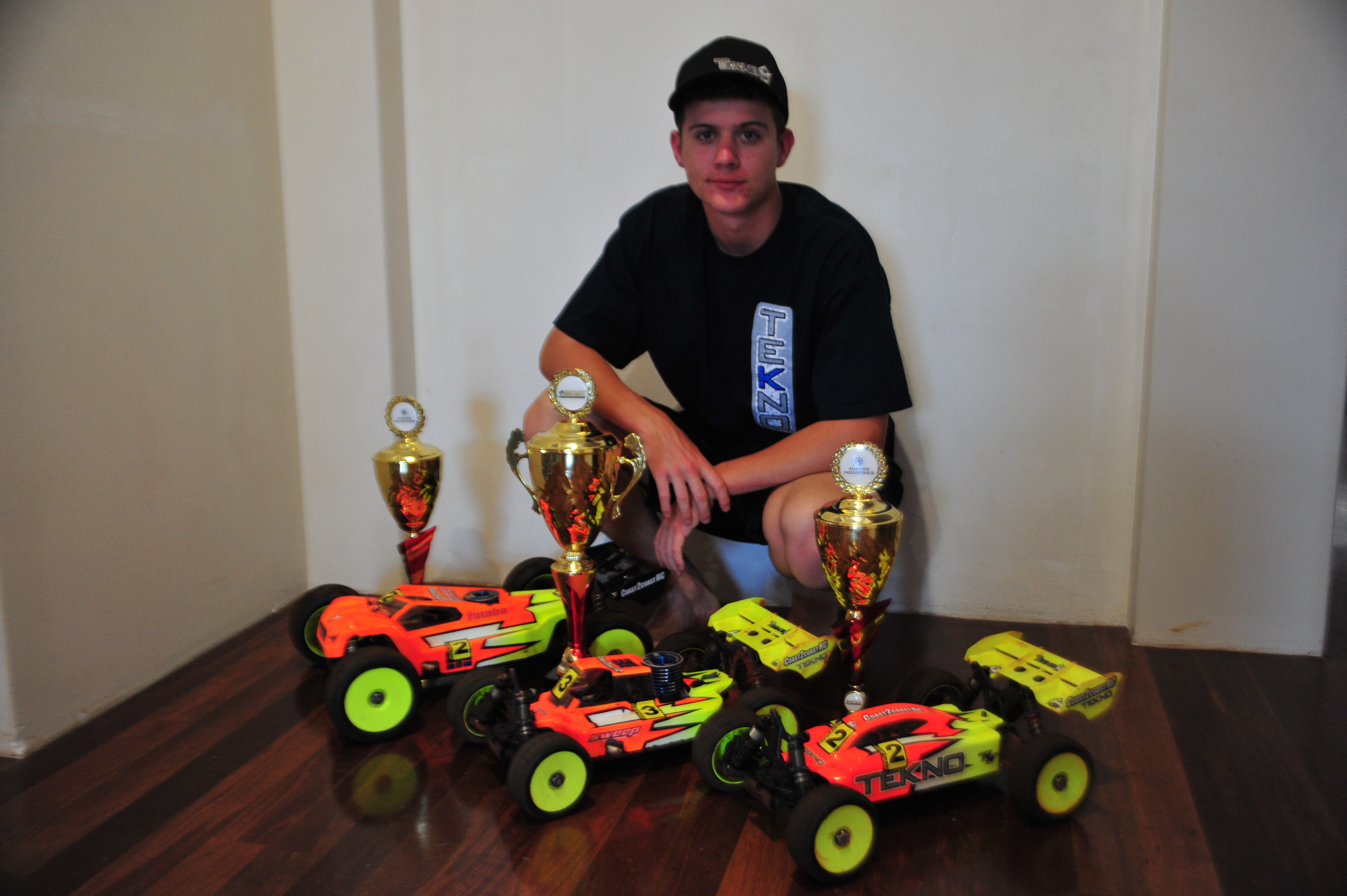 For the first time the titles were held outside the metropolitan area in Kalgoorlie, some 580km from the Capital, Perth. Whilst the other drivers were familiarizing themselves with the track during practice on the Friday afternoon, Kyle was preparing for his High School graduation ceremony on the Friday evening. After the ceremony and a couple of hours sleep, Kyle and his pitman (Father-Darrin) set out at 2.00am for the 6 hour drive to the track. Arriving half an hour before the drivers meeting, a quick setup ensured that Kyle was ready to go for qualifying where a huge task would be undertaken with Kyle competing in all 3 classes on offer, E-Buggy, Buggy and Truggy. 18 qualifiers later Kyle was relieved to be in 2nd for E-Buggy, 3rd for Buggy and 2nd for Truggy. The Tekno cars performed flawlessly during qualifying, with Kyle setting some very fast consistent laps.

Sunday morning the cars were readied for the finals, first up leg 1 of 3 for E-Buggy. A good start and a consistent smooth run on a deteriorating track saw him take the race win. An hour later leg 2 took place, unfortunately at the start a mistake by the top qualifier saw Kyle get caught up trying to avoid him dropping him to 8th after the opening lap. With nothing to lose Kyle put his head down and slowly reeled in the front markers, passing a car or 2 each lap until hitting the front with just over a minute to go. Once in front he never surrendered the lead and by winning leg 2 was now the WA E-Buggy State Champion.

The truggy final saw Kyle get caught up in other drivers mistakes and ended the first lap a few positions further back than where he started. For the next 20 minutes Kyle drove consistently and patiently, gradually working his way forward until hitting the lead and maintaining it. Kyle would end up winning the Truggy final by 2 laps!

The big question now on everyone’s mind was could Kyle make it 3 for 3?

The Buggy final started and once again Kyle got caught up in someone else’s crash, dropping him to 11th. Slowly the comeback started and he began gaining positions and the gap to the first placed driver was 18 seconds. A few laps later and it was back to 15, then 12. Kyle had the fastest car out there, it was just a case of keeping it on 4 wheels and having enough time to reel in the leader. Another 10 mins passed and the gap was down to 6 seconds, then 3 seconds. The race commentator was getting excited!! Over the next 10 mins the lead changed a few times with neither driver getting the ascendancy until the 38 minute mark when Kyle was called in early for his last fuel stop, a strategy that would prove decisive as Kyle got to the lead when the lead car pitted for his final fuel stop at the 40 minute mark. With 3 minutes to go Kyle had built up a 10 second lead and it was just a matter of staying out of trouble until the 45 minute mark. In the end Kyle was victorious by a lap having crossed the line 3 seconds before time ran out and ensuring he got a final victory lap.

An amazing weekend for the Coast 2 CoastRc Team Tekno driver picking up the win in all classes contested. Credit goes to Tekno for engineering a superbly fast and reliable set of cars.

The weekend by numbers:

Tekno RC was founded in 2005 after nearly 20 years of RC experience. Being located in sunny San Diego, California enables us to prototype and test new parts throughout the year. Our mission is simple: Design and produce parts that will make a performance difference. Just a little post and a couple pictures of our ‘First Look’ photo shoot from …
June 15, 2012
Read More